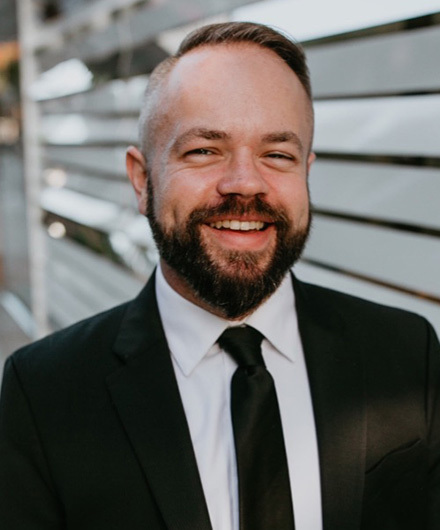 Mark Myers is a nationally recognized choral conductor and music educator. In his role as Associate Artistic Director, he co-conducts Voice of Chicago, conducts the Austin Neighborhood Choir and in the In-School Program, mentors the Future Music Educators Cohort for aspiring BIPOC music educators and oversees CCC’s music faculty. Mark also takes the lead in the coordination and development of the Choir’s performance-based culturally responsive curriculum.

Mark began his teaching career as Director of Choral Programs at The Choir Academy of Chicago Children’s Choir, a Chicago Public Schools charter school in the McKinley Park neighborhood focused on choral music education. As a first year teacher, Mark built a successful choral program from the ground up, serving over 200 students from across the city in five different vocal ensembles. The auditioned Treble Choir performed for several high profile events and was featured on each of Chicago’s four major television stations in addition to national broadcasts of CBS Sunday Morning and National Public Radio.

Mark went on to teach choral music and music theory for twelve years at Waubonsie Valley High School, serving a diverse student population from the western Chicago suburbs of Aurora and Naperville, Illinois. During his tenure at WVHS, the music department was recognized on five occasions as a Grammy Foundation Signature School and twice as a Gold Signature School. Mark helped to develop a large and inclusive program of traditional concert choirs and chamber ensembles, pop a cappella groups, a 135-voice all school unity chorus, and nationally recognized show choirs. He was awarded the Most Influential Educator Award from Waubonsie Valley High School and Indian Prairie School District 204 nine out of his twelve years in the district and was also recognized by the district’s Parent Diversity Advisory Council as an Equity Champion.

Under his direction, WVHS vocal ensembles performed across the globe, from New York City to Los Angeles and Australia to South Africa in venues including the House of Blues in both Chicago and Los Angeles, the Sydney Opera House, Davies Symphony Hall in San Francisco and Chicago’s Orchestra Hall at Symphony Center. The choirs also collaborated with a number of professional artists and ensembles, including Vusi Mahlasela, Sowah Mensah, Kirk Whalum, Anders Åstrand, Dolora Zajick, the Native Jazz Quartet, Chanticleer and the Chicago Sinfonietta.

Mark holds a Bachelor of Arts in Music Education from North Central College in Naperville, Illinois, where he was named the Outstanding Music Major, and a Master of Music in Music Education from Northwestern University, where he was the Program Honors recipient in Music Education. He has also completed graduate coursework in Choral Conducting and Ethnomusicology at UCLA. Mark is highly sought after as a guest choral conductor, clinician and adjudicator throughout the United States, including All-State Show Choirs and Concert Choirs in Alabama, Arizona, Illinois and South Dakota and residencies with high school, middle school and community choral music programs in twenty different states. He has also worked on the faculty of Showchoir Camps of America for the last 23 years as a pianist, choreographer and vocal director.