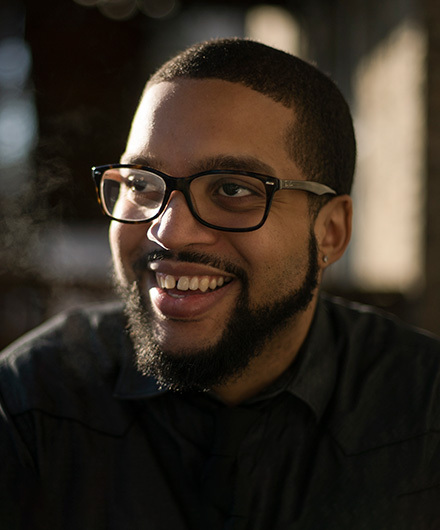 Mitchell Owens (CCC alum) is a composer, arranger, singer and instrumentalist. Beginning as a drummer at the age of two, his musical gifts were later nurtured by 10 years in Chicago Children’s Choir under the direction and mentorship of Josephine Lee. Owens studied percussion formally with Patricia Dash of the Chicago Symphony Orchestra and Douglas Waddell of the Lyric Opera Orchestra as part of the Chicago Symphony Orchestra’s Percussion Scholarship Program and studied piano at DePaul University with Regina Serkin.

At the age of 16, Owens was commissioned by Chicago Children’s Choir to compose a piece for its 50th Anniversary season, resulting in “We Need a Word,” inspired by Mitchell’s own life experiences and his understanding of the legacy of Dr. Martin Luther King, Jr. Owens went on to write and arrange for the organization as its Composer In Residence, including arranging the score for the original world musical Sita Ram, which saw three sell-out performances at the Harris Theater for Music and Dance in 2012.

Over the past few years, Mitchell has assumed the roles of producer, composer, writer and conductor, and has worked with artists such as Chris Brown, Rockie Fresh, Jason DeRulo, Ciara, TGT (Tyrese, Ginuwine, Tank), Lil’ Dicky, Trevor Jackson, Donnie Trumpet & The Social Experiment feat. Chance The Rapper, and many more. He has also worked on two film scores and is a co-composer with Grammy Award-winning Justin Timberlake on “The Devil and the Deep Blue Sea.”

Mitchell’s compositions embrace a variety of musical styles and mediums, with a passion for ensuring that musicians of all cultural backgrounds are free to express their own culture in their music. He wants his music to be universal. As Composer In Residence for Chicago Children’s Choir, Mitchell is excited and honored to contribute to the organization that has played such a pivotal role in his musical development.