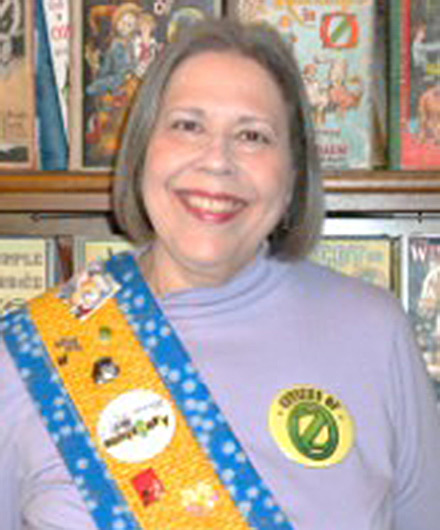 Carrie L. Hedges was a Staff Attorney at the U.S. District Court for the Northern District of Illinois until her retirement in September 2010. She previously served on the Board of the Chicago Children’s Choir since 1999 as a representative of the First Unitarian Society of Chicago. She was the secretary on the Board from 2000-2004.

Carrie’s extensive Wizard of Oz collection was featured in the October 2005 issue of Chicago Magazine. A framed original poster of “The Land of Make Believe” by Jaro Hess from her collection was in an exhibit at the Field Museum, “Maps: Finding Our Place in the World,” which ran from November 2, 2007 through January 27, 2008. The poster introduced the section of the exhibit featuring maps of the imagination. She has been a member of The International Wizard of Oz Club, Inc., since she was 16-years-old. She served as its president from 2010 to 2017.

Carrie joined Claudia Hommel’s Songshop at DePaul University Community Music Program in 2010. She has appeared in shows at Cyrano’s Bistrot, the Jazz Showcase, the Daystar Center, DePaul School of Music, and Piano Forte and in SongShop Salon House Concerts. She was an active participant in the Chicago Paris Cabaret Connexion in 2017, 2018, and 2019. Carrie is active in her church, and sings with the University of Chicago Chorus.