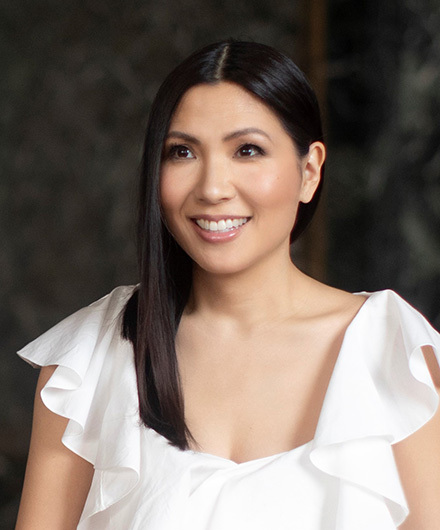 “Music is more than notes on a page. Through the breadth of our programming, our children are learning diverse social codes and through their voices are able to bring cultures together. Chicago Children’s Choir helps our singers become cultural diplomats and world citizens in our global society.”

Acclaimed conductor, pianist, singer, producer and non-profit leader Josephine Lee has made a widespread impact in the fields of music and education through an array of engagements across the globe. Ms. Lee has worked with a sterling roster of local and international artists and currently serves as President and Artistic Director of the United States’ preeminent youth choral organization, Chicago Children’s Choir.

Delivering a “sensuous and bluesy” performance (The New York Times), Ms. Lee recently sang in the world premiere of Pulitzer Prize finalist Ted Hearne’s Place, which received a Grammy nomination for Best Chamber Music/Small Ensemble Performance and played to critical acclaim at the Brooklyn Academy of Music’s Next Wave Festival. Other recent artistic engagements include a collaboration with Peter CottonTale on the viral work Together in Google’s Year in Search video (2020) and performance on The Late Show With Stephen Colbert (2021), an Obama Foundation feature called A Chorus of Hope (2021), a conducting debut with members of the National Philharmonic at Strathmore and Grammy Award-winning artist Lisa Fischer and her band Grand Baton (2019); a collaboration with Chicago Children’s Choir and Bobby McFerrin & The SpiritYouAll Band at Ravinia Festival (2019); the development and world premiere of Long Way Home (2018), a fully staged theatrical work with the Q Brothers Collective; the co-creation of the original world musical Sita Ram with David Kersnar of Lookingglass Theatre (2003, 2006, 2012); an original suite for piano and cello, Ascension, commissioned by Ballet Chicago (2017); an original piano composition, The Good Goodbyes, commissioned by Frank Chaves and River North Dance Chicago (2012); a collaboration on Chance the Rapper’s debut studio album The Big Day (2019) as well as a collaboration on his Grammy Award-winning Coloring Book, for which Ms. Lee led choruses in studio recordings and tour performances in 2016. In 2015, Ms. Lee founded Vocality, a festival chorus comprising Chicago Children’s Choir alumni as well as young vocal artists from a wide array of communities within and surrounding the city of Chicago whose mission is to exemplify the highest level of choral singing with an emphasis on excellence and diversity within its membership. Vocality made its premiere in July 2015 at Ravinia Festival in a concert performance of Porgy and Bess with the Chicago Symphony Orchestra, under the baton of Bobby McFerrin. Vocality returned to Ravinia Festival in July 2018 in a new staged production of Leonard Bernstein’s MASS under the direction of Marin Alsop as well as the encore production in July 2019, which was filmed for a national PBS broadcast to be released in 2020. Ms. Lee’s past orchestral engagements include those with the Chicago Symphony Orchestra, Chicago Sinfonietta, Chicago Youth Symphony Orchestra, Grant Park Orchestra, Lyric Opera Orchestra, Oregon Symphony and Sphinx Virtuosi. Future engagements include the development of a new theatrical work by J. Nicole Brooks, David Kersnar and Chicago Children’s Choir Composer in Residence W. Mitchell Owens III.

In her role as President and Artistic Director of Chicago Children’s Choir (CCC), Ms. Lee has revolutionized the field of youth choral music through cutting-edge performances of diverse repertoire and innovative collaborations with world-class artists. Through her vision and leadership, Ms. Lee has doubled the number of students served to 5,000, tripled the organization’s budget and established CCC as one of Chicago’s premier cultural institutions, solidifying partnerships with renowned arts organizations, including the Chicago Symphony Orchestra, Lyric Opera of Chicago, Ravinia Festival and Grant Park Orchestra and directing new works that capture the pulse of contemporary life in the global age.

In recognition of her leadership of Chicago Children’s Choir, Ms. Lee received the Kennedy Center’s National Committee for the Performing Arts Award for Arts Advocacy in 2018, the Roman Nomitch Fellowship in 2012 to attend the Harvard Business School’s Strategic Perspectives in Nonprofit Management program and was awarded the Jesse L. Rosenberger Medal in 2014 from the University of Chicago. Ms. Lee was recently featured in “The Transformative Power of Music,” a segment on Oprah Winfrey Network’s acclaimed show, Super Soul Sunday. Ms. Lee holds a bachelor’s degree in piano performance from DePaul University and a master’s degree in conducting from Northwestern University.