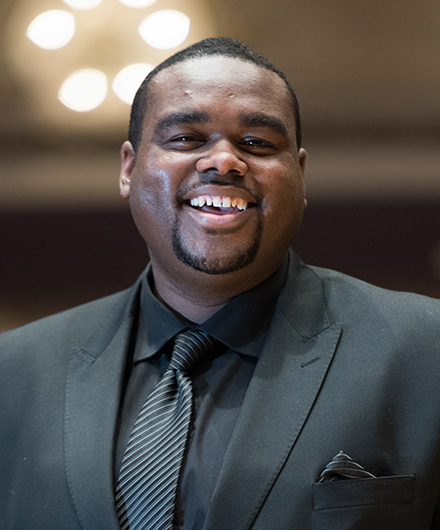 Born and raised on the South Side of Chicago, Lonnie Norwood, Jr. grew up with an unquenchable passion for music and community service. He knew early on that both would be integral parts of his life’s work. He received a Bachelor of Arts in Music from Luther College where he studied under world renowned conductor, Weston Noble. He went on to earn a Master of Music degree with an emphasis in Voice from The Florida State University. Upon completion of his education, Lonnie taught K-12 music in Leon County (Tallahassee) and Chicago area schools, both public and private. He has enjoyed numerous career highlights working as a versatile singer and arranger alongside such artists as Lizz Wright, Nona Hendryx, Nadine McKinnor, Ricky Dillard, Sweet Honey In The Rock, and Chicago’s Youth In Unity.

Lonnie joined the artistic staff at Chicago Children’s Choir (CCC) as a conductor in 2012 and opened the vivacious Englewood Neighborhood Choir (2013). His ensembles have performed at numerous city venues, including the Chicago Symphony Center, The Museum of Science & Industry, The Shedd Aquarium, Navy Pier, and The McCormick Convention Center. They have done three national tours and have been featured on WGN Channel 9 & ABC 7 News respectively. Their most significant work, perhaps, is in serving the community of Englewood through song at local churches, parks, shopping centers, block parties, schools, and assisted living facilities.

In recent years, Lonnie has become more active as a choral clinician, helping educators and ensembles understand the historical significance, vocal technique, and the social justice aspects of gospel music and African American spirituals. Recent work has included workshops with ensembles at the University of Chicago, teaching & singing with international ensemble Village Harmony throughout various provinces of South Africa, musical exchanges in Nassau, The Bahamas with members of the Bahamas National Youth Choir and Bahamian musicians, BFli Young Artists Camp at ETA Theater Chicago, and with SongRoots (Vancouver, British Columbia, Canada) teaching gospel and spirituals. He has also begun authoring articles along these lines of interests, including a recent work for the American Choral Directors Association’s Choral Journal (October 2018). Upcoming engagements include both a master class and guest lecture at Luther College on the Pedagogy of Gospel Music and The Practice of Representation in Music Education and being a guest performer with the City Soul Choir of Vancouver.

Every avenue of arts, outreach, and advocacy Lonnie embarks on is credited to his church upbringing. He established Audacious Praise (AP) in 2015, a multicultural arts outreach organization creating accessible, inter-generational programming that impacts social & spiritual awareness in marginalized communities. Audacious Praise is best known for one of South Shore’s finest inspirational open mic showcases, Fresh Faith Fridays, and have garnered great interest in its highly anticipated initiative, ChicaGO Reach Gospel Workshop (January 2020) to take place on the campus of The University of Chicago. He serves as lead musician and worship leader at Bryn Mawr Community Church in South Shore, under the direction of esteemed vocalist and conductor, Felicia Coleman-Evans.