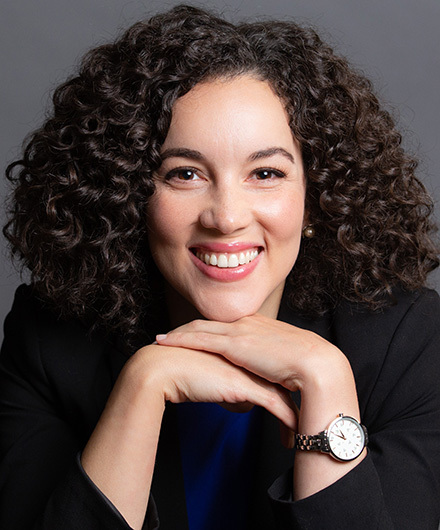 Choral conductor, singer and music educator from the Dominican Republic, Magdalena Delgado currently serves as the conductor of the Hyde Park Neighborhood Choir as well as an In-School Choir.

Prior to her move to Chicago, Magdalena served as Artistic Director of the children and youth choir, Voces del Mar, based in Veracruz, Mexico, and was the Founder and Artistic Director of Audimus, a professional chamber ensemble based in Xalapa, Mexico. While in Mexico, she also worked as an adjunct faculty member on the choral and voice faculties of Instituto Superior de Música Esperanza Azteca and the Centro de Estudios de Jazz of the Universidad Veracruzana (JazzUV), where she taught voice and voice techniques classes, courses in choral literature and conducted the preparatory vocal jazz ensemble.

In 2014, Magdalena earned her Master of Music in Choral Conducting, with distinction, from Westminster Choir College where she studied with Drs. Joe Miller, James Jordan and Amanda Quist. During her master’s studies, she served as Assistant Conductor of the Westminster Chapel Choir, was an integral member of the Westminster Symphonic Choir and served as a section leader for the world-renown Westminster Choir. While at Westminster, she performed on tours throughout the U.S., and alongside some of the greatest orchestras in the world under the direction of conductors of the highest stature. Prior to her master’s studies, Magdalena studied vocal performance at the Conservatory of Music of Puerto Rico and has served as a guest conductor for choirs of all ages throughout the United States, Mexico, Puerto Rico and the Dominican Republic. Magdalena received her bachelor’s degree in music education from the Universidad Autónoma de Santo Domingo where she graduated magna cum laude.

As a native of Santo Domingo, Magdalena began her musical study at age five where she studied piano, recorder and most importantly was a member of the children’s choir at her area music school, which served as her initial inspiration for her career path. Magdalena’s unique background and experiences inspires CCC singers.